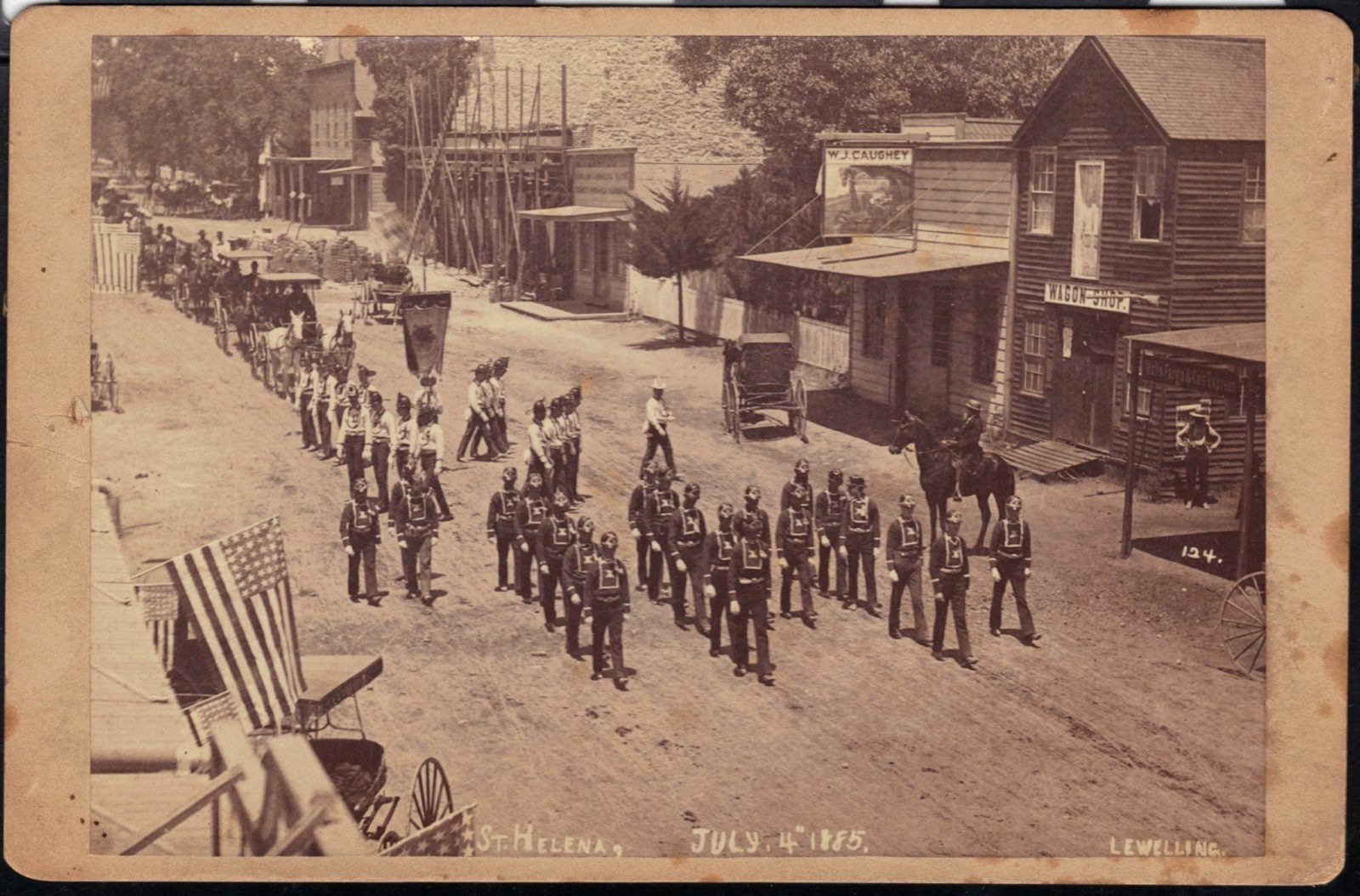 THE ERA
In 1885, Grover Cleveland was in his first months as president, the Statue of Liberty had just taken her place in New York Harbor, there were 42 stars on the U.S. flag, and it was the heart of an era of giddy American expansion we now call the Gilded Age.

HERE IN NAPA VALLEY, a spirited Independence Day patriotism took over the young city of St Helena–which was even then becoming known for its beautiful setting, generous hospitality, and free-flowing wines–as all gathered to host an epic “Grand Fireman’s Procession” for July 4th.

From morning ‘til midnight, the whole town joined in, led by the four companies of firefighters of both St Helena and Napa–along with nearly 500 guests from Napa who’d traveled to the Railroad Avenue depot on a special train with 4 extra cars attached! From Main Street parading to picnics, fireworks and dancing in Hunt’s Grove (at the end of Hunt Street), national pride mixed with local boosterism for a memorable day–which, luckily, there happens to be a photo of!

The Napa Firefighters Museum, Inc. archive photo of St Helena’s big Fourth in 1885, set us in search of what ink the St Helena Star might have spilled to describe the day, which fell on a beautiful Saturday that year. Well, the full page Star supplement is a delight! It waxes flowery in praise of the day, and of the Napa guests, and humbly quotes Napa’s Register’s St Helena compliments rather than brag overmuch on its hometown citizenry.

SMALL TOWN FOURTH OF JULY festivities–complete with flags, parades, picnics, flowery grandstand orations, fireworks and dances that went til all hours–had become increasingly popular throughout the United States since the country’s 1876 Centennial had marked a decade’s distance to the end of the devastating Civil War and spurred an intense reawakening of celebratory joy.

MY COUNTRY, TIS OF THEE…The Star’s coverage begins by printing four verses of “our national anthem,” America (whose melody is identical to “God Save the Queen”. The Star Spa

ngled Banner would become the national anthem only in 1931.)

As published in the St Helena Star July 10, 1885, available digitally at the St Helena Public Library’s treasure trove:  www.shpl.org (scroll to page 5 of 6)

THE SETTING
“Love of country was never more completely exemplified than in St. Helena at the celebration of Independence Day last Saturday. Citizens from all parts of the county were here assembled to join in commemorating the greatest event of American history. The town was decked in holiday attire, the glorious Stars and Stripes waved in the breeze from nearly every building in town and the beautiful site was one calculated to inspire patriotic thoughts.

St. Helena, if we do say it, on this day looked better than ever before. Her citizens seem to have combined in the work of making each one’s premises look attractive; the clean swept and coolly sprinkled streets, The profuse decorations added to the natural beauties of our flower gardens gave to the town and appearance that would not but impress strangers most favorably.

The “natal day,” which was a most glorious one characterized by lovely weather, was rushed in, by the time honored custom of firing crackers, bursting bombs and other like noises supposed by “Young America,” to evince the highest patriotism.”

THE PARADING BEGINS:
“Shortly after 9 o’clock the two local fire companies, constituting the Fire Department of St Helena, formed at the engine house and headed by the Phoenix Band, made a brief parade, then marched down to Hunt’s Grove where the large crowd already assembled, indulged in dancing pending the arrival of the morning train with visitors from Napa.

The excursion train consisting of four extra cars, arrived in St. Helena attached to the regular passenger train at 11 AM and the visitors some for 35 in number disembarked and mingled with the throng assembled to greet them.

AT HUNT’S GROVE
The order to “break ranks” was given and worthy leaders began the program–including a dramatic reading of the Declaration of Independence, “that immortal document whose familiar lines called forth the patriots applause of us hearers.”

There followed a grand and stirring oration, then the picnic, prepared by the Ladies Relief Corps of the GAR (Grand Army of the Republic–the first veterans association formed after the Civil War). There was an ice cream tent and a restaurant with free feasting offered to the guest firemen from Napa and just $.25 a plate for all others.

MUSIC TIL MIDNIGHT
The Phoenixand Excelsior Bands alternated excellent music and “dancing at the Grove was kept up till near midnight, the nearing of the Sunday morning hours warning all that July 4, 1885 was disappearing into the great and never to be recalled past.”

HOW TO BREAK UP A PARTY?
“A false alarm was sounding about 11:00 PM to show visiting officers of the State Fireman’s Association the alacrity with which our “boys” roll out. It was satisfactorily responded to.”

“The hospitality with which the Napa firemen were received and entertained has never been equaled on a similar occasion, and indeed, we doubt if it could be surpassed. The St. Helena boys certainly know how to entertain their guests. Situated among the trees a short distance south of the grand stand was the tent known as the “fireman’s delight.” Here was found an unlimited supply of Napa Valley wines.

…On the dancing platform and in that vicinity the youth and beauty of St. Helena were well represented and all seemed to be enjoying themselves to the utmost. Music for dancing was furnished by the Napa and St. Helena bands. When the train stopped at the depot the boys, with many a lingering glance at the fair ones, said a regretful goodbye, many of them promising to visit that delightful town again in the near future.”

FESTIVALS ELSEWHERE IN THE COUNTY
ANGWIN’S FIREWORKS: The Star then described festivities elsewhere in the county… The Fourth at Angwin’s Resort, for 80 people, including pyrotechnics that were “both grand and beautiful and produced an effect in the midst of our woods that was weird and picturesque as the blue lights took their flight to the starry heavens, leaving a track of light behind that shed a lustre over the adjacent nooks and canyons.”

Festivities were also recorded at Petrified Forest, Aetna Springs, Napa Soda Springs, on Dry Creek back of Oak Knoll, and a big one in Napa’s Terrace Springs, with Frank Coombs orating and and the Oakland Band furnishing music for dancing at the grounds and at Hatt’s Rink. Alas, there were no celebrations in Calistoga that year as many of its citizens were participating instead in Santa Rosa.