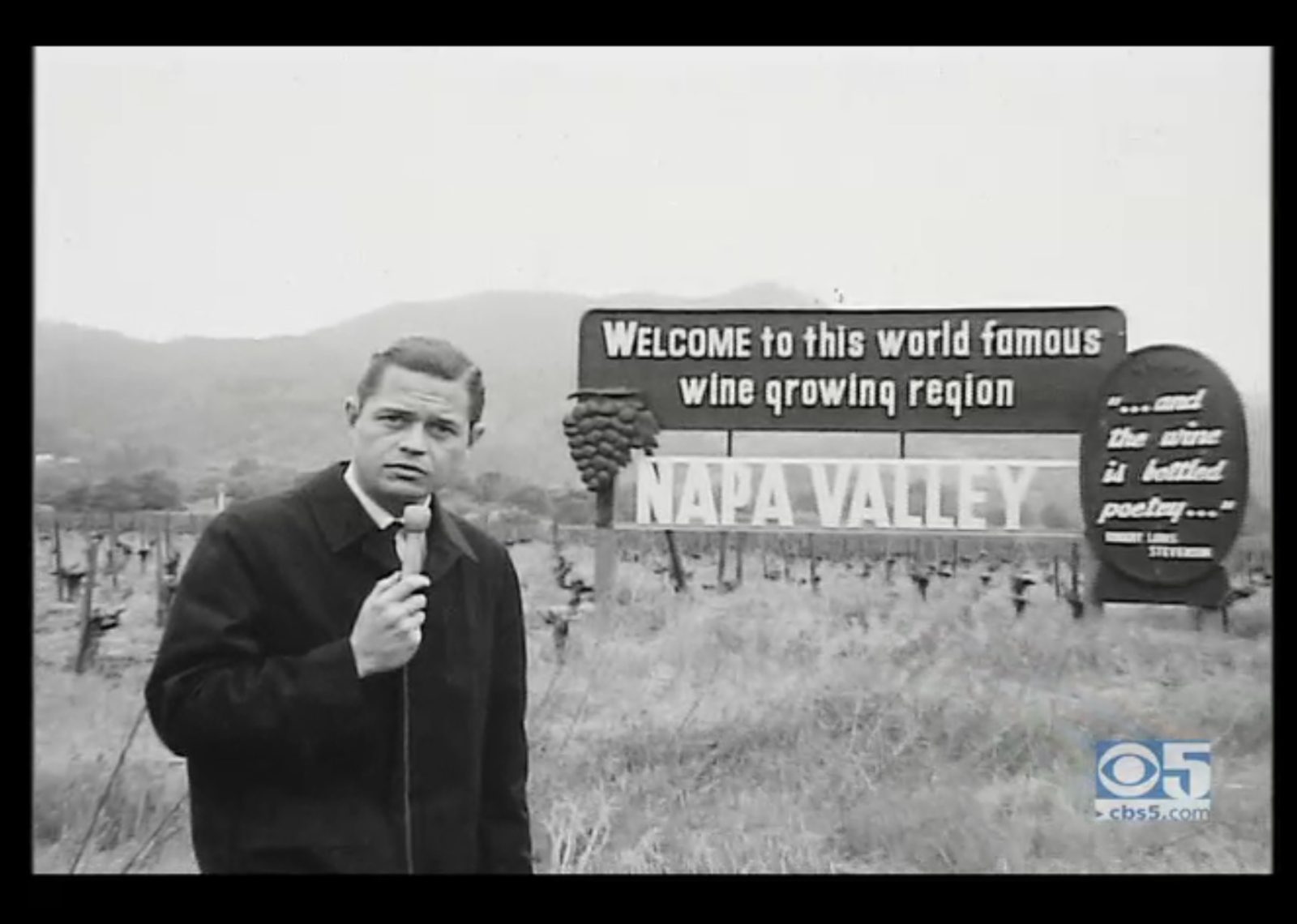 This amazing 4-minute TV newscast aired on the very day–April 9, 1968–that Napa Valley’s now famous and hallowed AG PRESERVE was adopted by our County Board of Supervisors.

WHAT’S THE AG PRESERVE?
This now-widely-revered land zoning ordinance was a 1st in the nation strategy aiming to protect NV farmland from commercial and residential development. No one knew in 1968 just how this experiment would work out, and boy was it ever controversial at the time, even vicious! But all is civil in this report…

(Reporter Pat O’Brien)
Wine grapes are California’s biggest fruit industry–nearly half a million acres planted in 48 counties–and this valley has been a major part of that giant industry from the beginning nearly 200 years ago. It still is.

But there is scant emphasis on that business here right now and none of the tranquility indicated by these pictures. 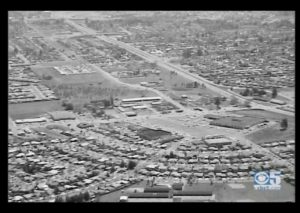 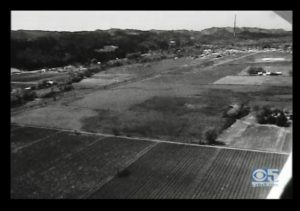 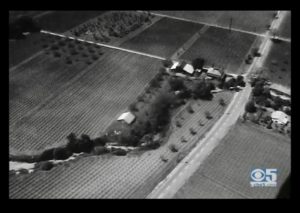 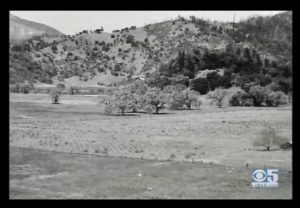 But there are other implications in the new ordinance, implications that do not sit well with some residents of the Preserve. And when John Daniel complains of them, he does not speak for himself alone. 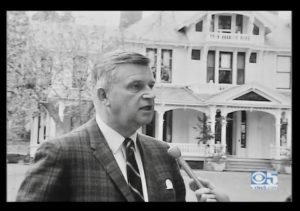 (John Daniel of Inglenook)
“Well, our principal objection to the thing is that it’s completely one-sided, that there are a group of people without any interest, or very little, financial interest in the area, all who want to get in the poker game without buying any chips. And these include the man with the house on the hill and an acre of land around it he wants to look down and see the vineyards just as they are; the conservationists who like to drive up the Valley and see it as it is; winery owners who want to freeze the land and the vineyards so that they will have a supply of grapes at a price that’s advantageous to them because if there was this freeze they would certainly benefit in that the landowner would be at a disadvantage and he would have to come to them pretty much at their prices. There’s also the professional planners who will be widening their field of influence. And last but not least, people in other parts of the County who have land or homes and they wish to sell ‘em or lease them, where they wouldn’t have the competition that might be available if this ordinance was not enacted.” 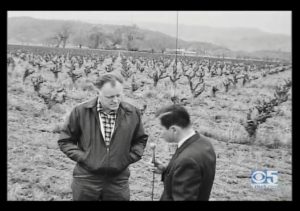 Do you think there’s a need to preserve it? In other words, is the Valley is in danger?

LM: “Well, anyone that’s traveled around California at all I don’t think could decide otherwise. It’s certainly in danger of an influx of population in the future which would automatically preclude it as an agricultural area.”

Daniel and Martini are talking about a zoning rule passed this afternoon by the Napa County Board of Supervisors which forbids the partitioning of land into any parcels smaller than 20 acres and further restricts the use of the land to agricultural purposes. The 25,000 acres of the Valley coming under the jurisdiction of this new law is to be called a Preserve and the name implies the basic reasoning behind the move to get that law on the books.

Mr. Martini, what would happen to the Valley, in your opinion, if this ordinance were not passed?

LM: “Well, I think eventually it’d end up much like Santa Clara is now. It would be a very definite concentration of population up here.”

The Williamson Act grants tax relief to a man who keeps his land in agricultural production. Isn’t that enough to preserve the Valley, in your opinion?

LM: “ No, actually we feel that what’s needed to preserve the Valley is a combination of both zoning and the Williamson Act because just tax relief won’t do it, because the people who are not interested particularly in retaining their land in agriculture will go ahead and subdivide it. And agriculture and concentrated areas of populations are very difficult to live side by side.

JD: “That’s a little bit like a control of a child where if it reaches out for something on the table, instead of telling him not to do it, threatening to chop off their arm. It really doesn’t have to be that way, in order to accomplish what is desired.”

As with most heated controversies there are valid arguments both pro and con. Those arguments aside at least for the moment, the result of THIS controversy has been a zoning ordinance which for the first time in California has been specifically aimed at protecting an area from some of the hazards of progress. Whether this ordinance is that protection, or a greater hazard, is an argument that has yet to be settled.

Pat O’Brien for Eyewitness News in the Napa Valley.